So, my brother Robbie came to visit in March/April. He lives outside Toronto with his wife of…is it 42 years??? Mercy, I think it is. They raised four darling, exciting, adventurous, brilliant, beautiful and incredibly loving children who are all growed up now and well-into their adult lives. He retired.

Yes, he is retired and isn’t this one of the greatest things that ever happened!? No longer must he catch the bus at dawn and then the train into the city, returning only after the sun has set and the dinner is done. He’s FREEEEE!! Now he’s free to create many an avatar and purchase many a Dover image without the slightest hint of giving a flying f%ick.

There are many things about his March/April visit to tell, but there’s only one for which I have documentation in the form of color photos. Well, there might be two, actually. But the Joe Indellicati caper will be reserved for another time.

Hubby and I had my bro and my mom over for dinner and we cooked something or other that was good BUT when I was setting the table, I remembered that I had fairly recently purchased a little book about napkin-folding at Barnes & Noble because it was on sale and God knows I do set a nice table and yet often have wanted to augment my napkin presentations. Napkin rings I have done, like foreeeever, and of course they are nice and garner the compliments. Still, as the book was on sale for $5.98, I knew the time had come  to go to that next level.

I found the book easily–tucked away on my shelf (a miracle, really)–and sat down to fold the napkins while dinner simmered. Robbie joined right in, reading the directions to me as we laughed a lot and folded ineptly. We managed four distinct and (as you will soon see) delightful designs. 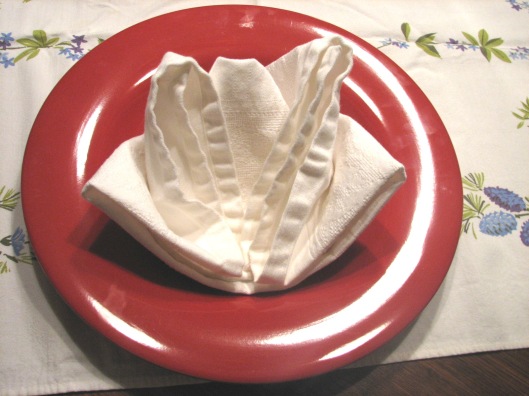 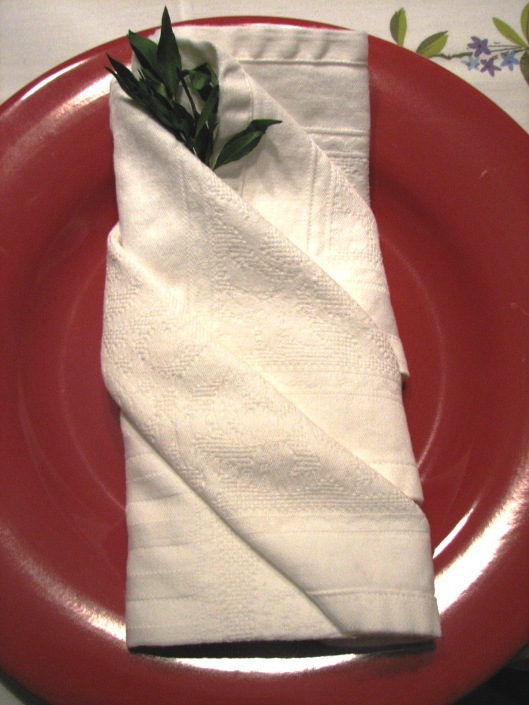 We liked the last one best, and that is unlike us since it is arguably the most conservative, but I think what sold it was that we could–and did–tuck in an herb. Robbie asked and I told him the one I plucked out of the crisper was flat-leafed Italian parsley, but of course it is not. I think I grabbed some cilantro instead, but what the hell…the fact remains that it is gloriously encased.

I can’t come up with an explanation of why. All I know is that this was a joyous experience and I highly recommend that I find more of the same as often as I possibly can. One time Tess’ mom told me that the Purpose of Life is to Have Fun and she would know because she was married to Tess’ father who did, like, heavy liturgical sculptures and wore monk clothes with blood stains and stuff.

Connect with me here:

Follow StudioSuzesque: Works on So Many Levels on WordPress.com